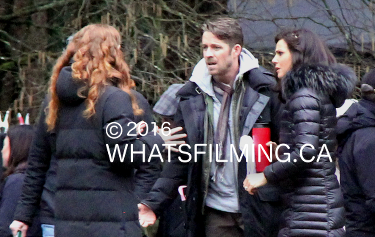 Once Upon a Time filming took place at one of their more frequent locations at Burnaby’s Central Park today. Check out a few photos below.

While I was there cast and crew were doing rehearsals and final preparation for the scene. At that time, Lana Parrilla (Regina), Sean Maguire (Robin Hood), Rebecca Mader (Zelena), Jason Burkart (Little John) and Raphael Alejandro (Roland) were all on set. The rehearsals were taking place near the West edge of the park’s Upper Pond.

Set Photos From Once Upon a Time at Central Park Today

Once Upon a Time
will continue filming Season 5 until April 1st and returns to air Sunday, March 6th following a long winter hiatus.