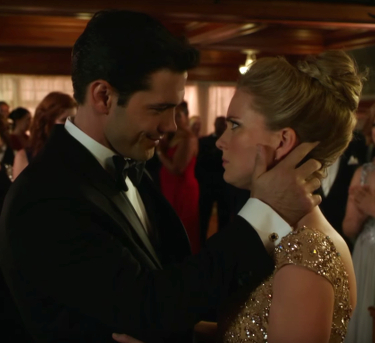 Unleashing Mr Darcy, a Hallmark Channel original movie that filmed in Vancouver, Langley and Maple Ridge throughout November is set to premiere Saturday, January 23rd at 9pm. Check out the the trailer for the film below.

Unleashing Mr Darcy is Hallmark’s adaptation of the popular book of the same name by romance novelist Teri Wilson. The story follows a woman named Elizabeth (played by Cindy Busby of Cedar Cove/Heartland) who, after a failed career early in her professional life, is looking to make some changes. They say true love comes looking for you when you least expect it. Elizabeth and her dog get the opportunity to partake in a professional dog show in New York. It is there that she meets the competition’s judge, Donovan Darcy (played by Ryan Paevey of General Hospital). After being put off by Donovans’ demeanour at first, Elizabeth finds herself attracted to Mr. Darcy.

Here’s a roundup of the main cast as found on the films IMDb page:

Here’s a few filming locations of note from the movie:

You can learn more about the writer behind Unleashing Mr Darcy, Teri Wilson at her website: http://www.teriwilson.net/

The Magicians Season 2 and My Christmas Dream Start Filming in...