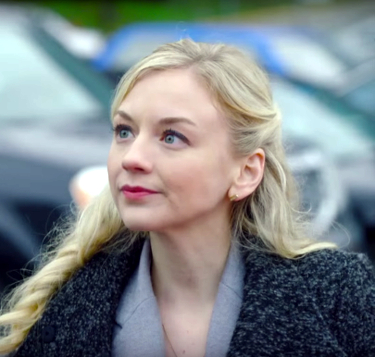 Love on the Sidelines with Emily Kinney of The Walking Dead filmed in Vancouver, Langley and Pitt Meadows this past October/November and premieres on the Hallmark Channel Saturday, January 16th at 9pm. Check out the the trailer for the film below.

Love on the Sidelines follows Laurel (Emily Kinney) who becomes the personal assistant of an injured superstar football quarterback named Danny (John Reardon of Continuum, Arctic Air). Laurel’s dream job is to be a fashion designer and she knows nothing about football. As a result, Danny is uncertain about having Laurel as his assistant but decides to take a risk and hire her on a temporary basis. Although the two have nothing in common, somewhere along the way opposites attract and they fall in love when they least expect it.

Looks like Emily enjoyed her time here in Vancouver, she tweeted/Instagram’d “Good vides today in Vancouver” the day after arriving for filming prep.

Here’s the official trailer for Love on the Sidelines:

If you’re a fan of filmed in BC content, you may spot Haley Sales and Patrick Sabongui in the trailer for Love on the Sidelines. Haley is known for her role as Shelly in Hallmark’s TV series Cedar Cove. Patrick plays Captain David Singh on CW’s The Flash. Both shows film in the Vancouver area.