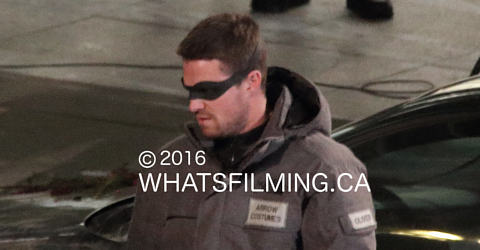 Downtown Vancouver’s Oceanic Plaza and surrounding area was transformed into a destroyed Star City on April 14th and 15th for the Arrow season 4 finale filming. Check out some photos below.

Filming of the Arrow season 4 finale titled “Schism” began on a nearby rooftop before moving down to West Hastings Street the first night. Surrounded by smoke, burning cars, various debris and a huge crowd of extras, the Green Arrow (Stephen Amell) and Damien Darhk (Neal McDonough) had their (final?) face off.

The next day, some scenes were shot during the daylight in the same area as the night before. This time it was Oliver Queen who was the centre of attention. Among the scenes was one where Oliver stood atop a “Starling” City Taxi and addressed the crowd below, rallying for their support.

Things clearly took a turn for the worse as it began to get “Darhker”. Production crew lit the cars back on fire to film what appeared to be the continuation of the scenes from the night before with the Green Arrow and Damien Darhk battling each other once again. I didn’t notice this the previous night, but John Diggle (David Ramsey) and his wife Lyla (Audrey Marie Anderson) were there for support. In between takes Ramsey flipped up his mask/helmet and chatted with Fight Coordinator James Bamford.

Check out lots more pics and details from the finale from Canadagraphs here.

Here’s the official extended trailer for the episode:

The story for the episode is from showrunner Greg Berlanti with the teleplay by fellow showrunner Marc Guggenheim and Wendy Mericle. John Behring is the director. John has directed several Arrow episodes including this season’s 2nd episode “The Candidate” and 9th episode “Dark Waters”.

Arrow officially wrapped up filming for the season at Vancouver Film Studios on April 20th. They’re expected to return to Vancouver in July to start filming season 5. The Arrow season 4 finale will air on May 25th at 8pm.