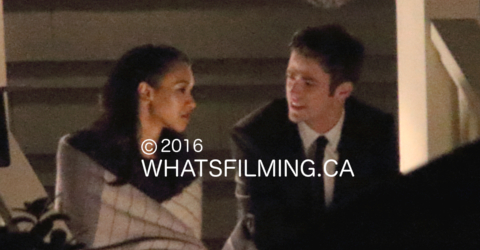 Last night, filming of The Flash season 2 finale with Barry Allen and Iris West (Grant Gustin and Candice Patton) took place at the location they use for Joe West’s house in Vancouver’s Westside. Check out some photos of the scene below.

After filming scenes for The Flash season 2 finale at Vancouver’s Mountain View Cemetery earlier in the day, they moved to the location used as the West residence in the show: 556 West 17th Avenue. Although they do a great job making it appear to be a very quiet neighbourhood on the show, it’s actually located only 1 block West of Cambie, one of Vancouver’s busiest streets. Interiors of the home are filmed on a soundstage, but the exterior can often be seen in establishing shots throughout the show.

Last night’s scene for The Flash season 2 finale took place on the front porch and steps of the house with series stars Grant Gustin and Candice Patton. The scene began with Barry, who was still dressed in his suit (not that suit), and was sitting alone on the steps. After reflecting for a few moments, he was joined by Iris. Iris exited the house onto the porch and sat down beside Barry. The two talked for a while before they were interrupted. Barry stood up abruptly and walked out of frame.

Here’s some photos of Barry Allen and Iris West during last night’s filming of The Flash Season 2 Finale:

The quality is not the best, but bear with us, we were pretty far away while taking those shots!

The Flash Season 2 Finale episode is scheduled to continue filming in Vancouver and area until April 17th and will likely air in late May.