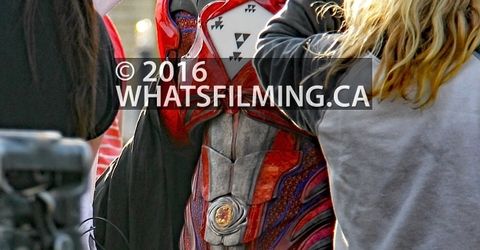 With San Diego Comic-Con happening over the next few days, and lots Power Rangers movie excitement happening there, it seems like a good time to share some behind the scenes photos we never got around to posting. Check out a few of our pictures below.

The new Power Rangers movie filmed in British Columbia from February 29th to May 27th drawing crowds of people as they transformed various locations into Angel Grove, the fictitious California town where the movie is set. Most notably though, was Steveston Village where production took over the town on and off for 18 days near the end of production.

Apart from a few days where many of the main cast were on set, the majority of the filming done in Steveston was background scenes which will presumably have characters added in post-production; Megazord and/or Goldar perhaps?

The movie is said to be a fresh new take on the Power Rangers franchise while still staying close enough to its roots to attract those of us who grew up with the TV series. Among the differences will be a new look for the Ranger suits, which got a drastic makeover as seen in the official picture (below) and the close up photos we took (further below).

In addition to Steveston Village, some of the other key filming locations used in the Power Rangers movie included:

The Power Rangers movie is currently slated to be released in theatres sometime in 2017.