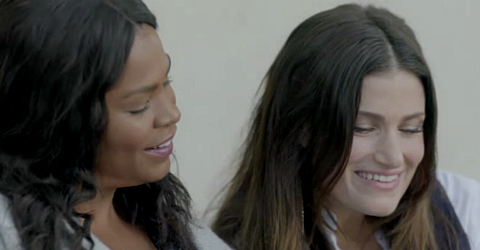 Lifetime’s Beaches remake filmed in Vancouver and area in August and September, and premieres on Saturday, January 21, 2017 at 8pm. Check out the Beaches remake official trailer, and filming locations below.

The TV movie is a remake of the 1988 feature film of the same name which starred Bette Midler and Barbara Hershey. The remake stars Idina Menzel, the voice of “Let It Go” from Disney’s Frozen as CC Bloom. CC is an up and coming singer who is in Los Angeles trying to launch her career. It’s there that she meets Hillary and the two form an unlikely friendship as they each chart their own destiny. Hillary is played by Nia Long (Big Momma’s House).

Here’s a roundup of the cast according to the movie’s IMDb page.

Here’s a list of the locations where the movie was spotted filming.

Let us know in the comments below what you think of the official trailer for Lifetime’s Beaches remake!