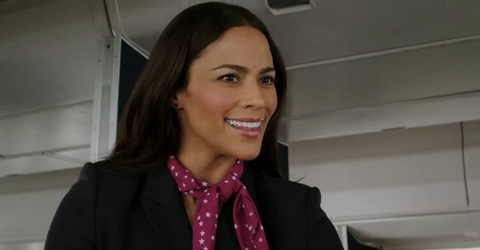 Although it may seem crazy, Laura is convinced that her daughter Serena is going to be murdered. Although Laura doesn’t know who the killer will be or why her daughter is being targeted, she does know when, where and how it will happen. Armed with that information, she desperately dedicates her time to keeping her daughter safe.

Paula Patton will be joined by Toronto-born actor JR Bourne (Teen Wolf) who plays Laura’s husband and state district attorney Tom Price. Rounding out the cast that has been announced so far is Vancouver’s own Aaron Craven (Ties That Bind, Gracepoint) and Rebecca Staab (Port Charles, The Irresistible Blueberry Farm) who play Haskell and Colleen Dekizer respectively.

Somewhere Between was written by Stephen Tolkin, known for writing Brother’s & Sisters which aired on ABC from 2006 to 2011. Vancouver’s Thunderbird Studios serves as the production company for the series. Thunderbird’s other scripted series credits include The Man in the High Castle, Continuum and Kim’s Convenience.

In addition to Somewhere Between and Once Upon a Time, which is currently filming, ABC also has four TV pilots which start filming in Vancouver this month. Check out a full roundup of those pilots and more in our 2017 TV Pilot Season in Vancouver Roundup.

Somewhere Between season 1 will be filming in Vancouver and British Columbia until June 15th and is expected to premiere this summer.

If you see any of these productions, including the Somewhere Between filming in Vancouver and British Columbia, be sure to let us know by tweeting us (@WhatsFilming) or via our Submit a Location page.