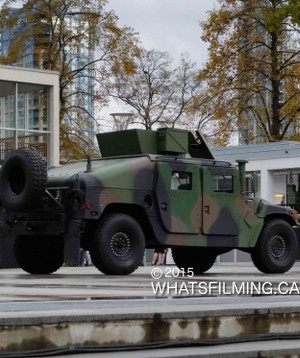 Arrow/Flash spinoff series DC’s Legends of Tomorrow filming took over Vancouver’s Queen Elizabeth Theatre today for a scene that looked like it was part of a different timeline or a parallel universe, depending on your take on the show.

On set there were several background performers/actors dressed as military men and women and marines (pictured below). Outside in the plaza there were a few military jeeps, a 1970s/80s vintage ‘Pentagon Police’ car and a coach bus that is destined for New York.

Here’s a few photos I took at the set.

Legends of Tomorrow premieres in early 2016 on CTV/CW, but in the meantime, if you haven’t already seen the awesome trailer for the show, check it out!

The series will be filming in Vancouver and area until April 1st. If you spot it filming be sure to let us know via Twitter (@WhatsFilming), leave a comment below or submit through our Contact Us page.