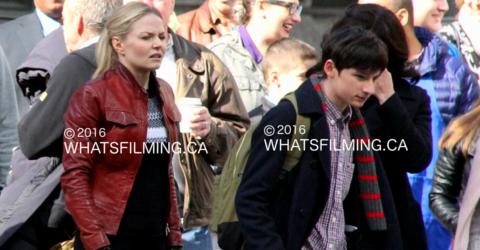 Last week Once Upon a Time was at the Vancouver Art Gallery to film scenes for their Season 5 finale. Check out some photos below.

Scenes took place on Vancouver Art Gallery’s North Plaza (Georgia Street side) near the water fountain and the Art Gallery stairs. If the location itself wasn’t enough of a giveaway, New York City taxi cabs lined the streets to help round out the NYC feel of the scenes. These taxis have been a common set piece at all the recent Once Upon a Time filming in downtown Vancouver.

While we were there Once Upon a Time was filming a scene with Jennifer Morrison (Emma), Lana Parrilla (Regina), Jared Gilmore (Henry), Robert Carlyle (Rumple), and Olivia Steele Falconer (Violet).

During one of the scenes, Henry climbed atop the giant lion statue at the top of the Vancouver Art Gallery stairs. From there it appeared as though he was “rallying the troops”; addressing the group standing below him and asking for their help.

In between takes, everyone was in good spirits; cast took the time to wave or stop to take pictures and sign autographs.

Here’s some photos of Once Upon a Time Filming at the Vancouver Art Gallery:

Check out @jholden23, @katmtan, @canadagraphs and @pursuit23 for more great pics from the same day.

Once Upon a Time is now officially wrapped up for season 5. Their last day of production was at their studio on Saturday, April 2nd. They’re expected to return in July to start filming season 6.