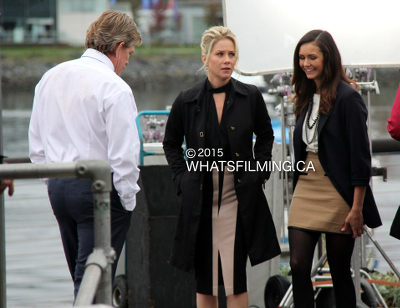 After spending some time in the downtown core over the last few days, Crash Pad moved to Vancouver’s Olympic Village.

The scene started with Nina Dobrev and Domhnall Gleeson conversing near the village’s Canoe Bridge along the shore of False Creek. Things heated up when Domhnall kissed Nina on the lips (photo below).

Following the kiss, Christina and Thomas walked over to join Domhnall and conversation continued.

Here are some photos from the set of Crash Pad today.

Crash Pad filming in Vancouver will continue until November 18th and is expected to be released in 2017. Crash Pad is using production signs with SLF on them. If you spot it filming or see one of the stars out in the wild be sure to let us know via Twitter (@WhatsFilming), leave a comment below or submit through our Contact Us page.