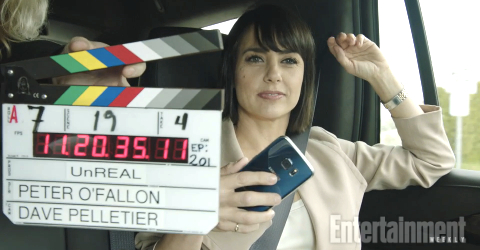 Lifetime’s reality TV parody series UnREAL Season 2 premiere is Monday, June 6th at 10pm. Check out a preview of what’s in store for this season below.

UnREAL is Lifetime’s parody of what goes on behind the scenes of a reality TV show. It centres around a fictitious reality dating series called “Everlasting” which closely resembles The Bachelor. Series leads Shiri Appleby (Swimfan, Life Unexpected) and Constance Zimmer (Agents of S.H.I.E.L.D., House of Cards) play Rachel and Quinn, the two master manipulators that stir up the drama that makes for good television.

In addition to Shiri and Constance, other familiar faces returning to UnREAL this season include Craig Bierko (Cinderalla Man) as Chet, Josh Kelly (One Life to Live, Transformers: Dark of the Moon) as Jeremy, Jeffrey Bowyer-Chapman (Stargate Universe) as Jay and Genevieve Buechner (The 100) as Madison. They’ll be joined by B.J. Britt (Agents of S.H.E.I.L.D.) who plays Darius, Everlasting’s newest suitor.

Here’s a pic of B.J. Britt as Everlasting’s eligible bachelor Darius during a break from filming UnREAL season 2 in Burnaby. 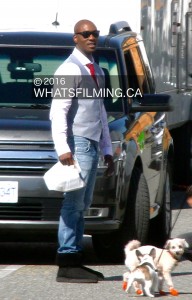 Ahead of the UnREAL season 2 premiere, Lifetime will be airing a 20 minute special in the US tonight that recaps the first season and gives a 10 minute UnREAL season 2 preview. It also features some behind the scenes commentary from the stars of the show. Thankfully, Entertainment Weekly has released the special online and you can check it out right now:

UnREAL is scheduled to continue filming in Vancouver and area until June 16th. Don’t miss the UnREAL season 2 premiere Monday, June 6th at 10pm on Lifetime.