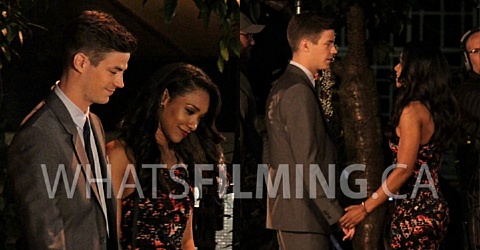 Last week, Vancouver’s Yaletown district was turned into Central City to film a date with Barry and Iris (Grant Gustin and Candice Patton) for The Flash season 3 episode 3. Check out some behind the scenes photos below.

Last season, many fans rejoiced as they saw Barry and Iris (aka “West Allen”) finally becoming more than just best friends. With Patty Spivot out of the picture, the two seemed to be building towards the future that was hinted at during the first season. But then, in a moment of weakness, Barry decided to travel back to the night of his mother’s death and save her which caused the Flashpoint timeline.

As we learned from the SDCC panel, things are a lot different for Barry and Iris at the beginning of The Flash season 3 as a result of Flashpoint. In this timeline, Barry didn’t grow up living with Iris and Joe, so they aren’t close like we’re used to seeing. They went to the same school and share the common connection of Joe but are otherwise nearly strangers.

The Season 3 Comic-Con First Look Trailer did a good job setting what we can expect from the Barry and Iris storyline during Flashpoint. Here’s a couple of quotes that really stood out with respect to them:

After watching the scenes being filmed for The Flash season 3 episode 3 on Wednesday, August 3rd, it seems like this could have been exactly what Barry was trying to do. Although he and Iris aren’t as close as he’d like in this timeline, it seemed like Barry was determined to do whatever he could to get their relationship back on track.

Barry, dressed in a grey suit and sporting a tie, met Iris outside of the delivery entrance to Central City Picture News. The location was the 1200 Block of Hamilton Street. Barry turned on his charm as the two stood and talked, exchanged smiles and laughs in front of a large heart-shaped prop made from flowers. Shortly after, the heart prop was swapped out for a sign that had Iris’ name spelled out in flowers. You could tell from her facial expressions that Iris was both shocked and smitten by Barry’s efforts to woo her.

It clearly worked as the two held hands and stared into each other’s eyes while continuing their conversation. They then left Picture News, holding hands as they walked away together.

As a bonus, here’s a pic of Grant in The Flash suit after finishing an earlier scene in a nearby alley. 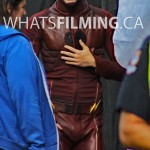 The Flash season 3 premieres Tuesday, October 4th at 8pm on The CW in the US and CTV in Canada. Barry and Iris along with the rest of The Flash team will continue filming in Vancouver and area until April 21st, 2017; if you spot them filming, be sure to let us know via our Submit a Location page.