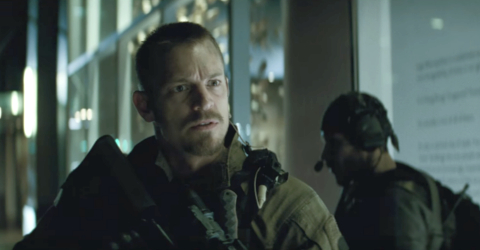 Takeshi is given a chance to redeem himself after being sent into a future where everything that makes up a human being is stored on a digital chip inside the neck of the body it’s attached to. The technology essentially makes death irrelevant because if something happens to your current body, you can just have your chip installed into a new one.

Although the series is just beginning, it’s already been drawing comparisons to HBO’s Game of Thrones in terms of production scale and ambition. In fact, according to an interview that Kinnaman did with Yahoo, the show is creating “a world that’s got a bigger budget than the first 3 seasons of Game of Thrones” making it the biggest production Netflix has created to date. Other Netflix original productions filmed in Vancouver and area include: Travelers, A Series of Unfortunate Events, Death Note, Haters Back Off and Project Mc2.

Joel Kinnaman is no stranger to filming in Vancouver. He played Stephen Holder on The Killing which filmed in the region during its 4 seasons. He also played the lead role in the 2014 Robocop movie which filmed mostly in Toronto but spent time in Vancouver for reshoots back in 2013. In addition to Joel Kinnaman, Altered Carbon has a solid cast announced already – here’s a roundup:

In addition to Skydance Studios in Surrey, signs for Altered Carbon (ACP) have been posted at downtown Vancouver’s former Canada Post building for the past few weeks. They were also spotted setting up at the Bloedel Conservatory at Queen Elizabeth Park by @TheRealMrSweary.

Altered Carbon Season 1 will be filming in Vancouver and British Columbia until June 20th, 2017.

The Wedding Stalker (aka Psycho Wedding Crasher) (TV Movie)
Jenna is a seamstress who works for her aunt making wedding dresses. Frustrated with never being the bride herself, Jenna decides it’s her turn to find the man of her dreams. She meets her perfect man, Glenn… AND his fiancée Marci. Although Glenn is already engaged, Jenna won’t let that minor detail stand in the way of her happily ever after.

Former Glee star Heather Morris is set to play a leading role in the movie. Vancouver’s own Fiona Vroom (Bates Motel, Death of a Vegas Showgirl, Dirk Gently) is also among the cast.

Production started on Monday at a private residence in Maple Ridge. The Wedding Stalker will be filming in Vancouver and British Columbia until November 30th.

If you see any of these productions, including Altered Carbon filming in Vancouver and British Columbia, be sure to let us know by tweeting us (@WhatsFilming) or via our Submit a Location page.